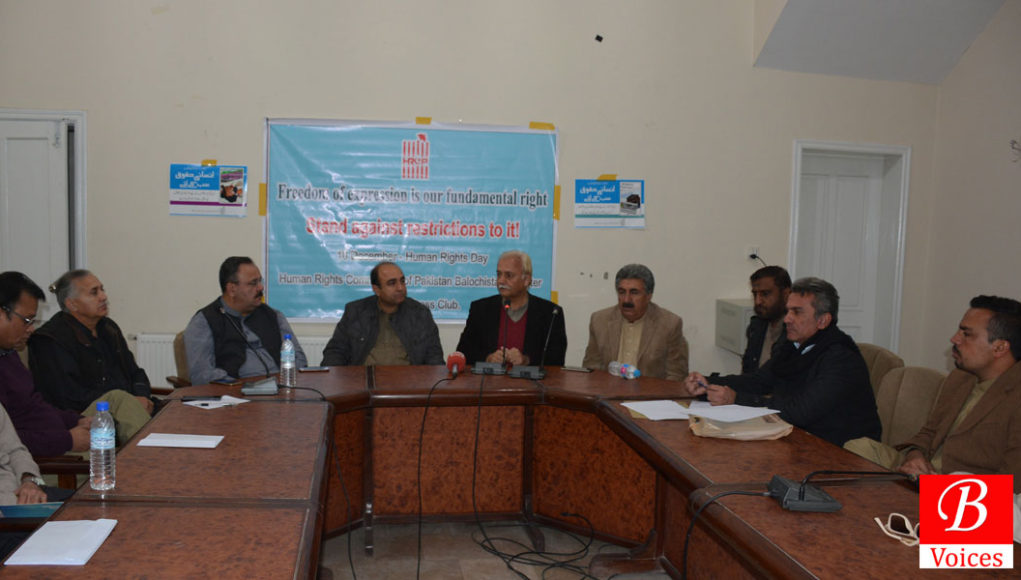 Quetta: Curbs on freedom of expression were condemned in the program of Human Rights Commission of Pakistan (HRCP) to commemorate International Human Rights Day, on Saturday.

The HRCP program under the theme “Freedom of Express is our Fundamental right – Stand against restrictions to it,” was organized in Quetta Press Club.

Addressing the program, Senior Journalist Saleem Shahid said that journalists in Balochistan have been deprived of their right of freedom of expression since 25th October.

“Journalists in Balochistan are working under very tough circumstances to report wrongdoings in the province,” said Shahzada Zulfiqar who is the former president of Quetta Press Club. He appreciated the courage of HRCP to raise voice on human rights violations in Balochistan.

Habib Tahir, Vice Chairman of Balochistan Chapter of HRCP, apprised the participants about the human rights situation in Balochistan.

“Section 144 is imposed almost all the time in Quetta city and that deprives people of plenty of basic human rights,” he said. “In the name of protest, different groups block roads and disrupt traffic which is also a human rights violation,” added Mr. Tahir.

HRCP vice chairman further added that NGO sector has been confined by the state in Balochistan, which is against basic human rights. He also lamented that minimum wage fixed by Balochistan government is also not implemented in the province.