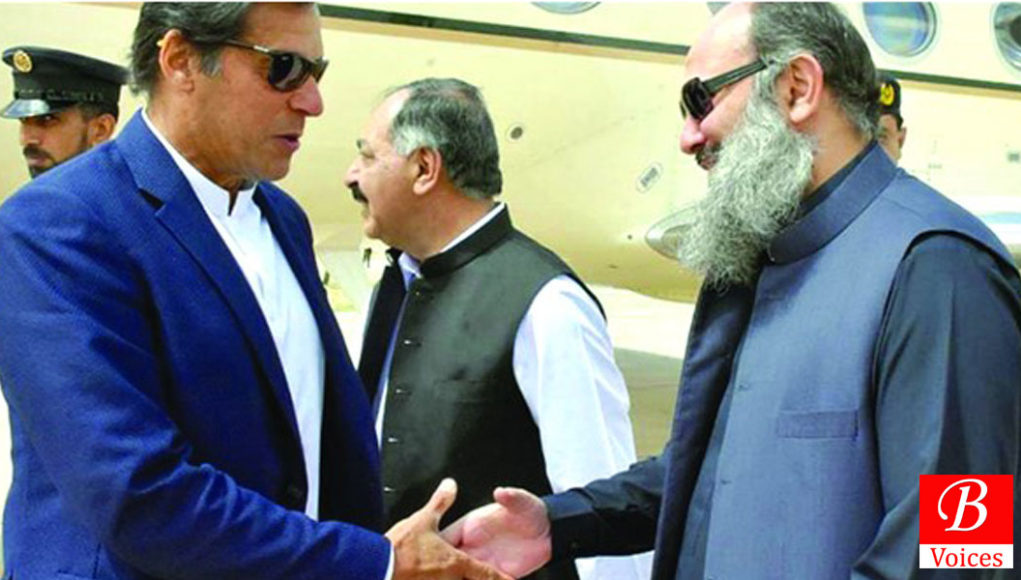 Last week, Prime Minister Imran Khan visited Balochistan for his China-Pakistan Economic Corridor (CPEC) tour. He arrived in Quetta on March 29 and main roads of the city were shut down for VIP movement. During his brief visit, the prime minister attended the ground breaking of Balochistan Health complex and the Quetta-Zhob portion of the western route of CPEC. In one of his speeches, Khan termed the western route a “game changer” for Balochistan. He also criticised the Pakistan Muslim League-Nawaz (PML-N) for ignoring the western route.

The PTI leader’s speech carried echoes of claims made by PML-N leaders in the past. Former prime minister Nawaz Sharif had also termed CPEC a game changer for Balochistan. Later, his government ignored the province in allocation of CPEC projects.

The 305-kilometre Quetta-Zhob Road will be upgraded into a four-lane dual-carriageway, the prime minister said. This was a response to the demands of the provincial government, which was asking for expansion of highways. Chief Minister Jam Kamal also said that Balochistan had officially become part of the western route after ground breaking of Quetta-Zhob upgrades, which will be completed at an estimated cost of Rs79 billion.

The same highway was inaugurated by Nawaz Sharif in December 2015 as a part of the western route. Later, it was discovered that this was funded by Asian Development Bank (ADB) and not CPEC. Is the recent groundbreaking ceremony different from Sharif’s in 2015? Only time will tell.

The prime minister also addressed Gwadar Expo, which was meant to attract investment in the city. This was the third expo in recent years

After spending a few hours in Quetta, the prime minister flew to Gwadar, the shining pearl of CPEC. His visit was marked by civil society protests over a number of problems. Hammal Kalmati, an MPA from Gwadar, wrote a letter to the prime minister before his visit to Balochistan and made some demands on behalf of the people of Gwadar.

He wrote that Rs5 billion should be allocated for development of infrastructure in Gwadar. He also demanded gas and electricity to meet growing energy needs of the people. He also demanded that the border with Iran near Gwadar be opened for trade. Finally, he asked the PM to resolve the problems of fishermen.

Historically, Gwadar has been a fishing town. A large part of the local economy relies on fishing. Last year, fishermen were prevented from entering the sea when the construction of Eastbay Expressway was launched. Since then, these fishermen have been protesting, demanded to be allowed to return to the sea. The construction of Eastbay Expressway, which connects Gwadar port with Makran coastal highway, has affected livelihoods of thousands of fishermen in Gwadar.

Khudaidad Wajo is the leader of the Fishermen’s Alliance. He told The Friday Times that 25,000 to 30,000 fishermen had been prevented from fishing for many months. “We were assured that our problems will be resolved but no progress has been made,” he said.

It is in this context that the prime minister announced some new plans. He said the government had allocated funds for bridges on Eastbay Expressway, through which fishermen could enter the sea. Wajo and his colleagues said they will take Khan for his word.

He said the alliance had postponed its protests for two months to give time to the government to address their problems. “We will resume protests if no headway is made,” he said.

The PM attended the groundbreaking ceremony of Gwadar International Airport. When completed, this will be the largest airport in the country. Work on this airport was supposed to begin two years ago but was held up due to operational delays. Funded by a Chinese grant of $246 million (Rs34.37 billion), this project will help develop infrastructure in Gwadar but it will not contribute to the socio-economic development of the port city.

Nasir Sohrabi, a civil society activist, believes that infrastructure projects have not generated employment for locals.

“People have got a few jobs in Gwadar Port Authority (GPA) and Gwadar Development Authority (GDA) but not in the operations of the port,” he said. He said after CPEC’s arrival, the real estate sector had been the major recipient of investment. “Investments in real estate do not help the development of the local economy,” he told The Friday Times.

The prime minister also addressed Gwadar Expo, which was meant to attract investment in the city. This was the third expo in recent years. Sohrabi demands that the organisers should inform public about how much investment they had managed to bring to the city as a result of the expo. “In an impoverished place like Gwadar, lavish expos should be meaningful rather than promotional exercises,” he said.

Khan’s trip to Balochistan and the announcement of several development schemes has toned down some of the criticisms of the provincial government on CPEC. Now, the challenge for the PTI government is to make good on these promises.